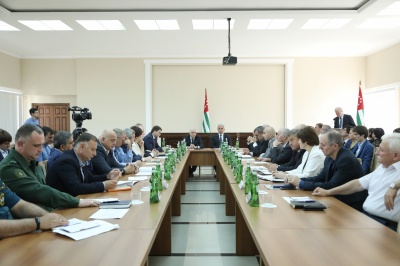 At the Cabinet of Ministers of Abkhazia was held a meeting on the preparation for the summer holiday season with the participation of the President of the Republic of Abkhazia Raul Dzhumkovich Khadzhimba.
The meeting was attended by representatives of ministries, administrations of cities and districts and actors of the tourism industry.
The meeting began with a speech of the Minister of Resorts and Tourism of the Republic of Abkhazia Avtandil Zefikovich Gartskiya.
“Our ministry is working in scheduled mode. We continue to conduct promotional and informational tours with the Russian agents’ participation. Earlier this week,the meetings were held with representatives of the Russian channel “Poekhali”. We agreed that we would shoot six films for 40 minutes each on various topics - culture, sports, rural life, ethnography, national cuisine, etc. The purpose of these events is to promote and create a positive image of our country,”said the Minister.
Avtandil Gartskiya noted that the official website of the Ministry of Resorts and Tourism of the Republic of Abkhazia is updated with the necessary information, and this work will be finished by the end of the month.
For the first time, began its work direct free hotline 8 (800), on hotline the ministry staff members are ready to answer the tourists questions, and let remind you, that it was done in order to counter fraudsters.
According to the minister, the expert academic council, representatives of tourism agencies, including members of guides union, conduct the final stage of certification of guides. This work is carried out to improve the quality of excursion services. Gartskiya informed that about half of the total number of tourists are excursionists.
“Unlike many countries, we have lots of excursions. Beautiful nature, objects of historical and cultural heritage, Orthodox churches all these make our country attractive for tourists from Russia and the CIS countries,” - the minister stressed.
Health Minister Tamaz Tsakhnakia reported on the measures taken by the agency on the eve of the holiday season, and Interior Minister Harry Arshba informed on measures to ensure security and public order during the holiday season 2019.
Summing up the meeting, President instructed the Ministry of the Interior to intensify efforts to curb the facts of the illegal use of animals in the tourism business. The State Administration of Transport and the Ministry of Taxes and Duties have been instructed to strictly monitor the situation with the use of licenses to transport passengers and goods across the Abkhaz-Russian border.